The COVID-19 health and economic crisis has added to ongoing global trade tensions and created significant disruptions in global supply chains, making it difficult for many businesses to both access the materials and supplies they need and ship their goods across borders. It is time to place our focus squarely on what we can do at home to stimulate economic growth and build resilient supply chains.

In a climate of heightened international trade volatility, fueled by a global pandemic, it is inexplicable to maintain antiquated domestic trade barriers that limit economic activity and growth. Until political leaders are ready to prioritize pro-business and pro-economy trade liberalization across provincial boundaries, Canada’s economy will continue to be held back from reaching its full potential and Canadian consumers and businesses will pay the price for our lack of vision.

The Canadian Global Cities Council, a network of chambers of commerce and boards of trade in Canada’s largest urban centres, believe that while we must remain steadfast in our commitment to open international trade, now is the time to strengthen east-west trade corridors within Canada and ensure that the elimination of interprovincial trade barriers is part of our economic recovery plans. Doing so will lower costs for Canadian businesses, boost competitiveness and economic growth, and encourage both domestic and foreign investment.

For decades, governments of all partisan leanings have made commitments to make progress on this issue. And yet, barriers in nearly every sector remain that create inefficiencies, cost businesses and consumers, and limit our overall economic activity and growth. When the Canadian Free Trade Agreement came into force three years ago, our coalition was optimistic that trade barriers would be resolved. It is now clear that the CFTA process, which relies on consensus between 14 governments, is too slow to accommodate the rapid action we need in response to the COVID-19 pandemic.

Your government has listened and acted on concerns raised by individuals and businesses to mitigate the economic impacts of COVID-19. Both at a national and provincial level, the increased collaborative effort has led to new supports and programs created and delivered in record time. This approach has helped our members cope with the unprecedented fallout from the COVID-19 pandemic and it is imperative to continue with that approach.

We urge you to implement a similar level of resolve to find consensus between provinces and pursue bilateral or multilateral trade agreements with provinces who are eager to move forward aggressively on dismantling internal trade barriers.

By building a coalition of willing partners, provinces can build much-needed momentum towards truly free trade across Canada. Frankly speaking, it just takes two – two Premiers to make history with the first true free trade agreement in Canada – to be a catalyst for other Provinces to follow.

Statistics Canada estimates internal trade barriers add nearly 7 percent to the cost of goods in Canada, while the International Monetary Fund estimates a 4 percent lift in real GDP if internal trade barriers were removed. Regardless of which estimates you choose to look at, the important thing to remember is that every modeling finds that there are substantial costs - not benefits - to consumers, businesses, and our economy. It is no wonder that in a public opinion poll last year, 9 out of 10 Canadians agreed there should be free trade between the provinces “because we are one country”.

Collectively, our urban chambers represent more than half of Canada’s GDP, population, and businesses from coast-to-coast. Businesses are stepping up and taking measures to weather this unprecedented crisis. We ask you to support them by removing unnecessary interprovincial red tape that impedes their operations and growth within the Canadian market. The current focus by businesses on their own digital transformation, including new adoption of e-commerce platforms, is opening new market opportunities. Let’s make sure that they can expand and be successful here at home, so they have a better shot at being successful internationally.

Premier, I encourage you, on behalf of our members, to be one of the first two Premiers to make this happen.

We realize you are getting multiple copies of this letter, which might be a nuisance. Just imagine how our businesses feel with the redundancy of red tape they have to deal with just to do business across their own country. 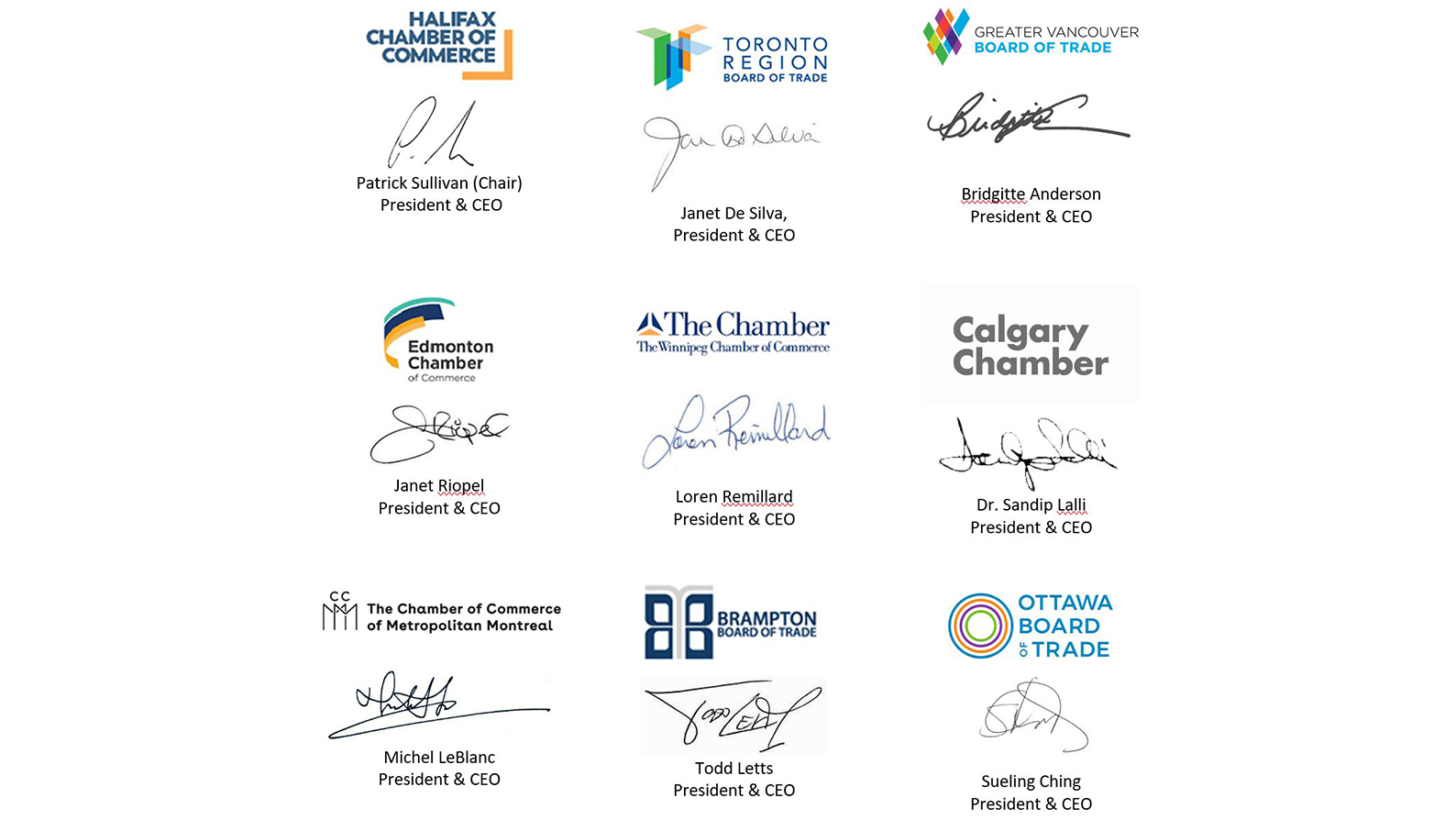 Founded in 2015, The Canadian Global Cities Council (CGCC) is a coalition of CEOs of nine of Canada’s largest urban Chambers of Commerce and Boards of Trade coast-to-coast: Vancouver, Calgary, Edmonton, Winnipeg, Brampton, Toronto, Ottawa, Montreal, and Halifax. Representing half of Canada’s GDP and population, the CGCC is a strong voice for national policies that build competitive and sustainable urban economies.